Four years of transportation of patients/injured by the volunteers of department of HRT in Cyclades, Paros

Four years have passed since the volunteers of Hellenic Rescue Team, department of Cyclades started to help the patients' transportation in the island of Paros, due to understaffing of the local emergency aid center. A handful of people with an old ambulance volunteered their services since 2012 to fill gaps in the shift schedule of the local emergency aid center helping as much as they can to save lives. In this big race, the costs arising are covered most times by the same vollunteers. During last year some local clubs, recognizing the work of Cyclades HRT department held events and part of their revenues covered some needs of the department, and also some people donated first aid equipment , but these offers do not solve the whole problem.

The situation in Paros deteriorates even more during summertime when the island octuple or some days tenfold its population, which results in increased accidents and generally incidents regarding the health of citizens. It is worth mentioning that only in last May and even before the beginning of tourist season, the Cyclades HRT department made 13 transportations in only 21 days. Totally in 2015, 99 transportations took place, while for this year, according to data from Cyclades HRT, up to June 24, 2016, there were 50 transportations. Many of the transportations are conducted during night, with the volunteers of HRT to respond to calls 24 hours and rushing to incidents even assisting the employees of local emergency center, due to the large number of injured or because of simultaneous incidents.

The above data reflect the tragic situation on an island, tourist attraction for thousands, and at the same time showing the lack of public health infrastructure in most Greek islands.

- Transfer of wounded in Paros Health Centre during sports events

All members of Cyclades HRT have been certified in First Aid (Basic Life Support) and Treatment of Trauma by the instructors of Hellenic Company for the Emergency Pre-hospital Care.

The department of Hellenic Rescue Team in Cyclades  invites all involved parts to bend over the problem and ask for the support of all those who can help. 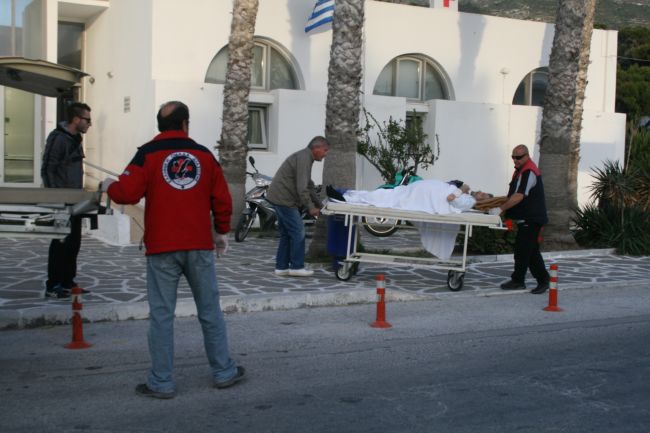