Paraplegic refugee rescue operation in the maritime region of Chios 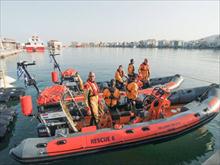 In the rescue operation of a paraplegic refugee with a disability in the legs, took part yesterday the Base of Hellenic Rescue Team in Chios, after a call from the Central Port Authority of Chios.

The refugee began to swim from the area of ??the refugee camp of Souda Chios towards the Turkish coast, at 12:30 noon, and in strong wave conditions and as a result his life was in immediate danger. Immediately the members of Hellenic Rescue Team in Chios were informed and responded in just eight minutes and staffed the rescue vessel IRINI (Rescue 6), that rushed to help. The vessel, having reached the site of the incident, identified one more immigrant who was swimming in the same area, and helped him to get out on the coast, while after a 20 minutes research the migrant with paraplegia was found exhausted on the rocks of the north breakwater of the central Port of Chios. The refugee was not able to swim enough to move away from the coast and was carried out to this point.

Members of HRT Chios carried both refugees safely to the port and from where they were transported by the authorities in the camp of Souda.