Rescue mission for 65 refugees in Lesvos 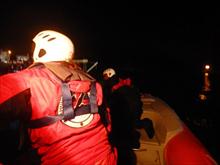 The HRT team of Lesvos was involved in a Rescue Operation of 65 refugees aboard a wooden boat at dawn on Sunday, December 6th.

More specifically, the Team was informed at 02:50 a.m. by the Mytilene Central Port Authorities about a wooden boat with 65 immigrants, which was located in Kratigos and had run aground about thirty meters from the shore. The Port Authority asked the members of the Team to assist with the boat «RESCUE 1» for the safe passage of the refugees to the coast in cooperation with the ship «Peter Henry Von Koss» which was in the area belonging to the RS Organization.

«RESCUE 1» arrived in the area at 03:20 a.m. with a crew of four and in cooperation with «Peter Henry Von Koss» - who oversaw the operation - moved the refugees safely to shore. Immediately after, the Port Authority informed the «RESCUE 1» crew about a second incident in the Myrsina area where immigrants had already landed on the coast and were facing problems. Always in collaboration with the «Peter Henry Von Koss», the Team approached the Myrsina islands and in the Lygounari area found the refugees who had already moved inland. After it was established that there was no problem, and after communicating with the Port Authority, the «RESCUE 1» returned to base.

The HRT’s rescue boat was present at both incidents with immediate readiness to engage if there was any risk to human life.