SAR operation with refugees on Chios 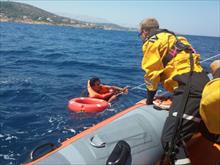 HRT Chios was alarmed by the Hellenic Coast Guard on Chios about an incident with a boat full of refugees, which was drifting in the sea area of Mursinidiou.

Immediately, the HRT crew with the two rescue boats "IRINI" and "ATHINA" responded to the call and reached the point of the incident, where there was already a Coast Guard boat. On the boat, there were 21 refugees, while strong winds of 5-6 beauforts were blowing at that time.

The HRT volunteers tugged, after relative request of the Coast Guard, the boat with the refugees at the marina, next to the central port of Chios. The operation was completed with success and the refugees were disembarked with safety to the island.